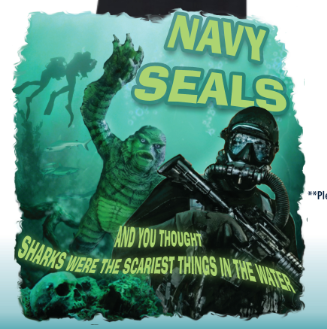 Creatures of the SEA

“The Creature from the Black Lagoon at the Underwater Demolitions Teams/US Navy Seals training center in Coronado California where future Navy Seals go through BUDs Basic Under water Demolition/Seals training and Hell Week. The statue was a gift from graduating class 63 to the naval special warfare center. It sometimes has a sign on it that says "So you wanna be a frogman?" around its neck and a trident in one hand and a net draped over the other hand. Ole Gillman has inspired some of the nations best warriors, go Gilly!” UMA

Creature from the Black Lagoon is a 1954 American black-and-white 3D monster horror film produced by William Alland and directed by Jack Arnold,