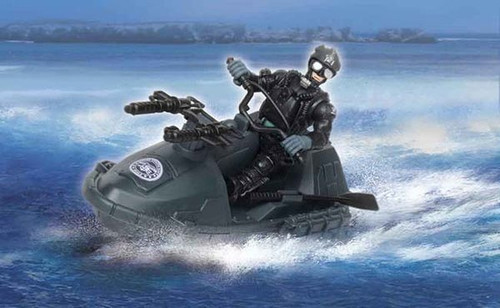 Suit up and head into combat with the Excite U.S. Navy SEALS Watercraft Playset. The officially licensed action figure comes complete with a full set of combat gear, including a weapon and sea equipment, to tackle the latest orders. With the included watercraft, this SEAL figure can arrive at the scene and use its posable limbs to dive in and complete any mission.

·         With an officially licensed U.S. Navy SEALS figure, watercraft and equipment, there are plenty of action-packed adventures to   come
·         3.75-inch U.S. Navy SEALS action figure with posable hands and feet for realistic play
·         Includes a full set of combat gear
·         Action figure's hands are highly detailed and dexterous to carry out orders

What's in the Box

Recommended for ages 4 years and older.